SmartSTAFF™ is a streamlined solution which will manager all your staff's safety clothing, footwear and PPE allow for easy ordering and reporting.

For office manager Jolene Hall ordering Personal Protective Equipment (PPE) and clothing for David Browne staff was becoming an unwieldy and time-consuming process. Each staff member is allocated two pairs of cargo pants or shorts each year along with other safety gear. But these are ordered as and when needed. So with some 70 staff members asking for items from safety boots to fingerless gloves and other workwear, it was hard to track who had what, when they’d last ordered, what they’d last ordered and other relevant details.

With items being ordered without being allocated to specific staff members, it also meant that sometimes orders would turn up and not be what the person expected – the safety boots might be different to those they had last time for example and not what they wanted. This would mean returns or items that didn’t get used. 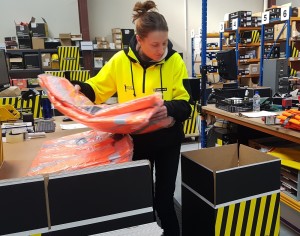 What Jolene and the business needed was a system that would allow them to allocate items and keep an easy to view history of each individual staff member’s orders. That’s when Leedsafe told her about the SmartSTAFF system.

It sounded promising so, after seeing a demo, Jolene and the David Browne team decided to give it a go. Jolene received some training on the system from Leedsafe and has found the interface straightforward to use.

The ability to allocate items when ordering was beneficial straight away and now when an order arrives Jolene can immediately see on the system who it is for. But as time passes the full scope of the system is also becoming evident. “You need a year or a year and half to see the full benefits,” says Jolene, “I just had a guy come in this morning needing new boots the same size and same type as last time. I looked on SmartSTAFF and could see straightaway what he had ordered last year. It was so simple”.

Tracking staff members’ orders over time, also allows Jolene to identify any issues or instances where individuals are requesting new items more often than usual due to loss or misuse. The system can also generate reports on why items are being allocated, so for example if an item is being ordered because it’s lost or stolen, or simply because of reasonable wear and tear. Reports can also show how much different departments might be spending on PPE. “Every business has different needs of course, but for us it really meets our needs. We haven’t looked back really. I wouldn’t go to any other system now,” says Jolene.